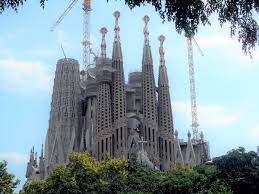 A visit to the Vatican inspired the bookseller, Josep Maria Bocabella, to build a church. He started collecting donations for the Basilica de la Sagrada Familia (the Basilica of the Holy Family) in Barcelona, Spain and construction began in 1882. A year later, after the first architect resigned, a Catalan architect called Antoni Gaudi took charge of its design and resumed construction. However, in 1926, when the basilica was less than twenty-five percent complete, Gaudi was tragically killed in a tram accident. Work on the Basilica Familia proceeded slowly under Gaudi’s assistant before it was halted by the Spanish War in 1936, during which parts of Gaudi’s original designs and models were destroyed. After the war, using a combination of reconstructed models and original designs, construction inched forward. In 1980s, the new architects on board introduced computers for its design and construction process. The Sagrada Familia is now slated for inauguration in 2026, if completed by then, it would be more than 150-years since its construction began, the time it has taken to build this church surpasses that of many Egyptian pyramids.

What makes this story so remarkable is that while the people and tools used changed over the years, Antoni Gaudi’s design vision for the Sagrada Familia was followed over its 150-year construction period.

This story is an example of what’s called cathedral thinking. The Macmillan dictionary defines cathedral thinking as very long-term projects or goals realized for the sake of or benefit of the future. This term originates from looking back at how cathedrals were built. Those who envisioned the grand cathedrals like the Notre Dame, people like Antoni Gaudi with his Sagrada Familia, envisioned exactly how it would look when completed and made plans that they might never see completed within their lifetime.

However, we live in times with no sense of permanence. We stay anxious about an uncertain future and we use words like “agile” and “pivot” to navigate and constantly make, what we imagine, are course corrections to someplace better. Making constant changes seems like making progress. Increasingly, our time horizons are shrinking until we are hyper focused on the immediate future alone. This explains our fascination with short-term tactics and our impatience with long-term goals.

But marketing straddles both the “long” and the “short”. Stripped to its essentials, the principles of cathedral thinking are; a far-reaching inspiring vision, a well thought-through blue-print and evolving a shared commitment for long-term implementation. The very things required to build great brands.  Some of the world’s greatest brands; from Stella Artois (since 1366), Colgate (since 1806) or Coca-Cola (since 1886) or Harley-Davidson (since 1901) have outlasted generations of managers. Hence, it may be useful to apply a ‘cathedral thinking’ lens when taking decisions relating to branding and in building distinctive brand assets.

The many ways people might be able to identify your brand including colors, symbols, logo, tagline, sounds, smell, characters or tone-of-voice are called distinctive brand assets. Their value is in what people associate them with, in what they bring to mind for your audience. It’s then that the assets act as a trigger for this meaning and encourage action. They act as a shorthand for a brand.

Building distinctive brands assets may require what I call, a relentless pursuit of sameness. This pursuit of sameness does not eschew the usage of technology and digital tools, it is not as much about how the brand is communicated than about what about the brand is being communicated. It calls for not getting distracted by internet fads with lifespans shorter than that of a Mayfly but having an almost zen-like focus on creating meaning for the brand. In fact, modern understanding of the physiology of the human brain and how memories are created and retained also underscores the importance of ruthless consistency. The aim really is to create easy-to-remember assets that will over time (with consistent and constant use) create memory structures, keep the brand top-of-mind for buyers and ensure what’s termed as mental availability.

This pursuit of sameness and how brands and distinctive brand assets are built, ironically, goes against the dominant narrative of our times that overemphasizes change and rewards all things “new and shiny”.

For instance, many new CMOs and brand managers succumb to the lure of rebranding, without truly investigating alternatives including retaining or strengthening existing brand assets. The sheer act of tearing up the old to replace with something new is seen as making progress. Rebranding not only fits the dominant narrative, it’s also an opportunity for managers to leave their personal legacies behind. In contrast, building, strengthening and evolving what exists is a lot tougher.

To distil, protect and nurture what’s core to the brand and yet evolve and keep-up with changing times, technologies and consumer tastes may seem like conflicting goals. But this dualism is much like ying and yang from ancient Chinese philosophy where seemingly opposite forces may be complementary, interconnected and interdependent.

When tactics dominate most of what marketers do, the pursuit of sameness with the goal to build a lasting brand can be a north star that could inspire different choices while making marketing decisions. Most marketers familiar with the concept of product and brand lifecycles know that while the product’s form may change with time and with newer technologies, the brand can be immutable and immortal.

As marketers, we are worshipers at the altars of commerce. The pursuit of sameness and building an immortal brand is probably the closest we will ever get to building a cathedral.