Home › Of Marketing, brands etc. › The perils of the Piyush Pandey we think is hidden inside us.

The perils of the Piyush Pandey we think is hidden inside us.

Harry Baals – and, yes, it is pronounced as “Balls”, remember this, it is important to the story – was the mayor of Fort Wayne from 1932 to 1947 and again from 1951 until his demise in 1954. During his tenure, Mayor Harry Baals upgraded city equipment and services, consolidated city departments, lowered taxes and launched the construction of Fort Wayne’s massive underground sewage system and built the city sewage treatment plant, which is still being used today. By all accounts, Harry Baals served his people very well in his over two-decade tenure as their Mayor and the people of Fort Wayne were very grateful to him.

In early 2011, Fort Wayne city officials launched a campaign to name a new Government building and sought names from its citizens. When the votes were in, the name that trounced its closest contender by a ten to one margin was “Harry Baals Government Center”. Fort Wayne’s citizens showed just how grateful they were to their beloved Mayor and the double entendre was completely lost to them.

In many organizations, creative or design reviews are done by a committee. (Of course, this is not true in that enlightened organization you work in). Like the citizens of Fort Wayne, they may even vote on the options presented by the Agency. To ensure ‘diverse opinions’ and what is described as ‘broad feedback’; it may include members from other – non-marketing – functions too; Purchase, Finance and even the office Secretary may be invited to share unbiased views. Each person on the committee shares his or her view on the Creative, but invariably such discussions veer to alternate headlines churned out on the spot by Committee members. These lines are, of course, proffered as mere suggestions. There is indeed a Piyush Pandey hiding inside each of us, awaiting the opportunity to burst forth, spew headlines, write copious lines of body copy singing peans to the thingamajig the company sells. This opportunity to serve on the committee or simply being an asked an opinion on creatives is a welcome respite from excel sheets, vouchers, audits, process manuals and all the regimented dreary stuff they must put up with in their jobs.

The campaign brief be damned. 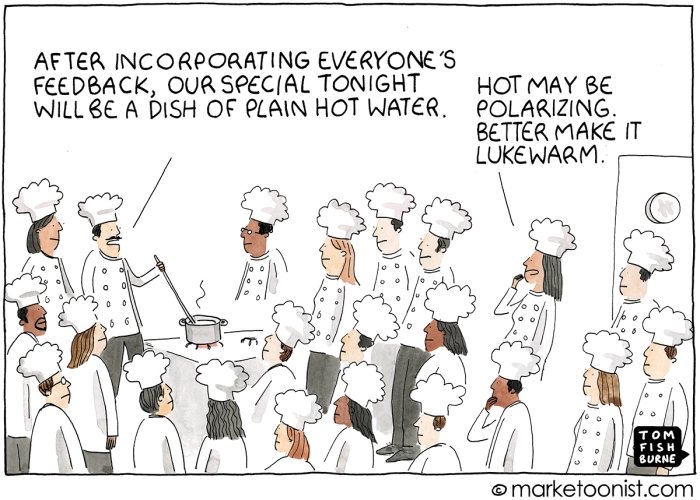 As one Allan Sherman said “They sit there in committees day after day, and they each put in a color and it comes out grey. And we all have heard the saying, which is true as well as witty, that a camel is a horse that was designed by a committee.”

It is a lot easier to kill ideas than it is to create one and groups and committees are most suitably equipped to critique, criticize but not create. Some of these committees can suck the life and soul out of ideas and the enthusiasm of the person presenting it. They can be like Dementors, the ones Harry encountered on a train in the book, Harry Potter and the Prisoner of Azkaban.

A large marketing campaign can be expensive and in case of failure, it can cost the company a lot more than just the media dollars invested. Picking the right idea that can cut through clutter and deliver the marketing objective requires more than just an intimate understanding of the consumer and the market. It needs gumption and the courage to make bold choices. With committees everyone is responsible, but no one is to blame.

Of course, this is no diatribe against seeking diverse views. There is value in seeking divergent and broad views, they can make some ideas stronger, offer perspectives that you may miss. After all, when you stand hugging a tree, you cannot see the forest. If you must seek views, it may be best to have a separate internal huddle and keenly sift through feedback to pick up nuggets of value and ignore the rest. Look for perspectives you may have missed, interpretations unnoticed, the ones that could lead to legal complications or make the brand susceptible to online trolls.

But while you do that, ultimately, as a marketer, you must decide. The brand you build is a sum of the choices you make.

Coming back to the city of Fort Wayne and unfortunate double entendre resulting on account of the name the good citizens selected. Finally, common sense prevailed over the vote and city officials did not name the building ‘Harry Baals Government Center’ since they realized that Harry Baals was not as well known outside Fort Wayne and didn’t want visitors misunderstanding this. The building was hence named blandly, as Citizen’s Square.