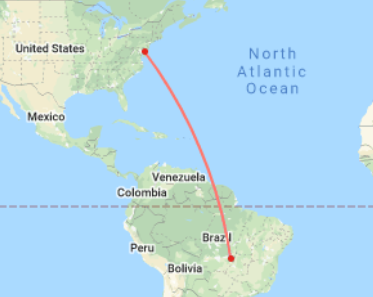 The Veery, is a bird that nests in forests across the US and southern Canada and migrates across the Atlantic and the Gulf of Mexico to spend winters in South America’s Amazon region. In 2018, Christopher Heckscher, an ornithologist who studied the Veery since 1998, made an astounding discovery; the length of the annual Veery breeding season and the number of eggs they produced varied with the severity of the hurricane season. This meant that the veeries were able to sense what the season had in store and would fly across the Atlantic Ocean earlier before the worst of the hurricanes made their passage impossible. Using breeding and migration data collected over twenty years and the Accumulated Cyclone Energy index (measures the strength and duration of all named storms in a hurricane season) Christopher Heckscher published his paper and tweeted his prediction for that year. For the 2018 hurricane season, Christopher’s predictions were far more accurate than those generated by meteorologists using state-of-the-art computer models.

Christopher Heckscher’s discovery is simply a correlation. No one would confuse it with causation and state that an early migration of the Veery causes severe hurricanes. However, correlation and causation are often confused (and misused) in marketing and advertising.

One of the reasons we confuse correlation with causation is due to how we are hard wired as human beings.

We consider ourselves to be logical beings and when we see an unstructured mess, we instinctively start looking for patterns and logical explanations. And once we find it, we start believing that it’s undeniably true. We are hardwired to seek patterns where there may be none and that’s our biggest delusion. And then there is confirmation bias; the tendency to search for or interpret information in a way that confirms or supports one’s belief’s or values. We can find a ‘logical’ explanation suiting us for pretty much anything.

The other reason we confuse correlation with causation could be stemming from Zuckerberg’s now-famous motto “move fast and break things”.  This gift from the technology sector has largely meant moving faster and faster down a predetermined path. Consider this example; after addition of a new feature to the website, increases in web traffic in the weeks following are attributed to this change and its success showcased by the teams involved. With no patience or time for experimentation with control groups or replicating events to verify results, the leap to causation is made and teams rush to the next project.

This focus on velocity short circuits deliberation and deep-thinking and rewards jumping to quick conclusions. And over time, depth is sacrificed for agility and without us knowing it, we may have made a shift to moving fast and faking some things. As the American comedian Dennis Miller says, there is nothing wrong with being shallow as long as you’re insightful about it.

But knowledge and deep insights stem from an interdisciplinary approach, staring at gestalts and from time for quiet reflection. While no Luddite is a marketer, our bias for speed needs to be balanced with time for slow deliberation.