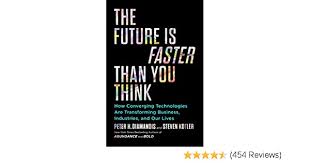 The Future Is Faster Than You Think is divided in three parts. The first section is about the forces of acceleration and changes brought about by converging technologies. In the second part, the authors give an overview of its impact across industries like Shopping, Advertising, Entertainment, Education, Healthcare, Longevity, Insurance, Finance, Real-Estate and Food. While the first two parts hold a decadal perspective, Part Three, looks beyond, into the next hundred years of humanity. It explores the challenges we face including the ongoing water crisis, climate change, tech driven unemployment, rogue AIs and touches upon a potential tech driven Five Great Migrations.

Off the Five Great Migrations, I found the concept of virtual migration fascinating. With people spending more and more time on the internet, with new AR and VR technologies, humans could very well migrate into the virtual world.

If you spent your testosterone fueled youth in the pre-internet age, in the 90s, you might remember looking forward to an annual magazine compilation called the Best of Debonair. Part Two of The Future Is Faster Than You Think is its techno-porn equivalent. It reads like a compendium of articles on the future of industries as diverse as Shopping and Longevity. (And hence difficult to summarize in the Book Summary.)

The Future Is Faster Than You Think describes technologies like BCI (Brain-Computer Interface), that promise to augment the human brain capacity; our cyborg future. (In fact, Elon Musk demonstrated a coin-sized implant in a pig’s brain this month.) In recent years, the chasm of inequality has been growing wider. While it’s been blamed on the concentration of wealth and privilege, on the race and gender divide, human capacity has always been equal. Where everybody had the same capacities, some of our greatest enterprises; from Columbus to Gandhi to Steve Jobs reflected their unique initiative and perseverance. But with BCI, this will be soon upturned, some people will have more capabilities than others; furthering inequality. The world can do without this BCI created techno-Aryan.

This book, like most books on technology, predicts a tech driven utopia. It’s where software, AI lord over the world, disrupt business and transform human lives. Tech dominates this world view and the possibilities of some people doing ‘non-tech’ things is mostly ignored. And this is the book’s Achilles heel. But in the end, reading The Future Is Faster Than You Think, is like going on Mumbai Darshan – the one-day Mumbai city tour for tourists. After a whirlwind bus ride through the city, with your tour guide pointing out the landmarks, while you think you know Mumbai, in reality you don’t. Like Mumbai Darshan, The Future Is Faster Than You Think, lacks depth.