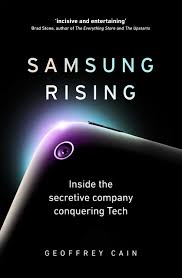 Geoffrey Cain’s Samsung Rising reads like a thriller rather than a staid chronicle of Samsung. The book starts with stories of the Galaxy Note 7 disaster, giving us a peek into a ruthless corporate culture so obsessed with beating Apple, that issues prior to launch were probably glossed over. But, reducing the debacle to mere business rivalry may not be completely accurate. The conflagration was probably a cumulative result of Samsung’s origins, it’s culture over the years and the company’s preeminent role in South Korean economy.

Geoffrey takes us back in history, to Samsung’s origins in 1936 and founder B.C. Lee usage of “political savvy” to build a flourishing business. The origins of the intertwining of Samsung with a nation is probably hidden somewhere within this euphemism. Left unsaid are tales of corruption, crony capitalism and use of political connections to expand B.C. Lee’s fortunes. Following General Park’s coup d’e’tat in 1961, Samsung made its pivot from fertilizers to electronics, under what then seemed like unfortunate circumstances. But that fateful event helped chart a new trajectory for the company –electronics. The chapters chronicling the rise of Lee II ‘the silent one’, Samsung’s chairman after B.C.Lee’s death, his exposition of “New Management” and the philosophy of ‘perpetual crisis’ make for very interesting reading – from his yelling at executives for sixteen hours to a public burning of $50 million worth of electronic goods.

The sections chronicling Samsung’s growth in America, evolution of their design philosophy, the now famous “The Next Big Thing” campaign and the Ellen DeGeneres Oscar selfie are gripping and a treasure trove of marketing insights.

Samsung Rising also takes us through a journey of Samsung’s work culture, which to the most of us accustomed to an egalitarian Western work ethic, may strike as bizarre or even slavish. We meet the ‘Samsung Man’ who spends his lifetime working for the company, where the art of nunchi (gauging the other person’s mood even if he says nothing) is an essential survival skill, where employees sit through three days of tirades by the Chairman and the wildly successful ‘Next Best Thing’ team gets publicly rebuked to prevent others from thinking independently. And finally, when the company makes the move to do away with its authoritarian top-down hierarchy, an old Samsung employee laments ‘We look around and our Samsung spirit exists no more, our empire is not an empire. We are becoming like any corporation.”

While Samsung Rising is a chronicle of B.C. Lee entrepreneurship and his progeny’s efforts to build Samsung. It’s also a sordid tale of Samsung’s relationship with ethics– in what can only be politely termed as casual, akin to a one-night fling. From Chairman B.C. Lee’s efforts to save his son from corruption charges during General Park’s regime to Chairman Lee II conviction and pardon (twice) to Jay Lee’s (Samsung heir in waiting) current imprisonment for bribery among other charges. The book is also a sobering reflection of how South Korea is still the Republic of Samsung and the nation cannot survive without Samsung.