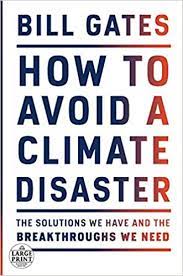 Why read a book about climate change?

With the world split between believers and deniers, climate change can be contentious. In his book, How To Avoid A Climate Disaster, Bill Gates doesn’t even pretend to persuade the deniers. Bill Gates’ book is for people who believe that climate change is real and that it holds dire consequences for us.

Climate change is beyond the horizon of regular people. To us, climate change is something to be solved by Governments and world leaders who meet at global summits, make declarations and sign accords. We are vaguely aware that adopting EVs, using renewable energy, reducing deforestation, reducing usage of plastics, adopting the 3 Rs (Reduce, Recycle and Reuse) could help address the challenge of climate change. But frankly, most of us, don’t know much beyond this.

Bill Gates’s book is an invaluable primer on climate change for everybody.

In the opening sentence, Bill asks us to remember two numbers; 51 billion and zero. 51 billion tons is the amount of greenhouse gases the world adds each year and zero is where we need to get this to.

Most articles on climate change involve big numbers; for instance; megawatts or gigawatts of power generated by a renewable source. Bill helps put these numbers in context, from how much power the world consumes right down to how much an average American home does. He uses the analogy of water flowing out of your kitchen faucet to explain the concept of “watt”.

The books true genius lies in making an incredibly complicated topic like climate change simple. For instance, Bill Gates breaks down the source of the 51 billion tons of greenhouse gas emissions into five categories; how we make things (cement, steel, plastic etc.), how we plug in (making electricity), growing things (farming and growing animals etc.), getting around (from cars to planes to ships) and keeping warm and cold (air conditioners and heaters). For a lay person, this is an eye opener and that’s probably when the sheer enormity of the climate change challenge hits home.

The bulk of the book is focused on the challenges, current and emerging technologies available to address each of the five major sources of greenhouse emissions. It’s a colorful “world map” of technologies in play with “zooming in” for details left for more curious readers to do on their own.

In between the pages of a sexagenarian’s (yes, Bill Gates is sixty-five years old) How To Avoid A Climate Disaster, one catches glimpses of a geeky Bill Gates as he marvels at manmade technological wonders. He acknowledges that while technological progress has transformed human lives it has also caused the challenge of climate change. He talks about the cruel injustice that even though the world’s poor are doing essentially nothing to cause climate change; they’re going to suffer the most from it. He devotes a chapter to adapting to a warmer world, from managing to farm with unpredictable and severe weather extremes to creating defenses against rising ocean levels and more.

Bill Gates stays away from the politics of climate change, in fact, he forewarns readers right in the introduction. Hence, the weakest section of the book is where he writes about solutions that lie beyond technology; like policies and what governments and people should or could do. Thankfully, these anodyne sections are at the books tail end.

Reading How To Avoid A Climate Disaster leaves you with a sense of the incredible opportunity available in addressing climate change. And what investments in scientific research, developing and deploying new technologies can truly accomplish. It also left me wondering, that software services driven startups rewarded with “unicorn” status, looked up to as showpieces of technological breakthroughs, may be shallow accomplishments when compared to what science and technology can truly accomplish.

How To Avoid A Climate Disaster educates, informs and stimulates thinking and therein lies the answer to the question I started this book review with.